This film was written in response to the incredible success of the first season of the original  Batman: The Animated Series, released in the 1990s. Distributed by Warner Bros. and directed by Eric Radomski and Bruce Timm, it did poorly in theaters, yet garnered fairly positive critical reviews. My memories of this movie are vague, but the story has haunted me for the better part of my life. Something about it has kept a hold of me and even until I watched it maybe a month ago I still thought about some of the underlying messages and themes. After seeing it for the first time in perhaps ten years, I surprisingly didn’t like it as much as I thought I would. In fact, I responded very negatively to it. Does this mean it is a bad film? Oh no. It is a superb film.

The movie opens rather quickly when a mysterious cloaked figure called the Phantasm, who bears a striking resemblance to Batman, murders the gangster Chuckie Sol. This violent occurrence sets into motion the deaths of other gang bosses whose relationships date ten years prior before Bruce Wayne had become the infamous vigilante of Gotham City. As a whole, the plot flows smoothly even with the interlocking flashbacks of Bruce’s past. The story line isn’t unique by any means but it works well with the dark undertones of Batman’s story.

The main focus of Phantasm however lies in Bruce’s memories where his vow to his parents coincided with his romance with Andrea Beaumont, all of which are mysteriously connected to the subsequent murders. It is heartbreaking to see the plot unfold. As a huge admirer of the original animated series, I was apprehensive and knew too well Bruce’s history with romance.

His affair with Andrea reminded me of the relationship between Rick Blaine and Ilsa Lund from Casablanca (1942) because I knew that it would not and it could not end happy. Unlike with Casablanca, I was incredibly unsatisfied with Phantasm’s ending. The difference lay in each couple’s parting and choices. Rick chose to let Ilsa go with her husband to prevent the regret and hurt that would consequently follow their selfish affair and to help fight for a better world. In Phantasm, their chance at happiness together dissipated the moment Andrea broke off their relationship and disappeared. (A sacrifice vs. a tragedy) By the time Andrea and Bruce met again they had been broken too many times for them to ever be happy together again.

None of the characters feel displaced in this movie, though it is common movie adaptions of cartoon series for their creators to put characters in just for the sake of familiarity. The main focus is on how each of them, especially Bruce and Andrea, lived with the tragic events of their past and handled their pain.

Bruce Wayne had that familiar depth seen in the TV show and other adaptions, yet the movie focused more on the tragic events that pushed him to become Batman. What is interesting is the conflict between his desire to have a family with Andrea and his promise to his parents. If Andrea had stayed would he have still become Batman? No. The risk of her being put in danger would have been too much for him. It was her disappearance that shut him inside himself again and in his loneliness he finally became the Batman. 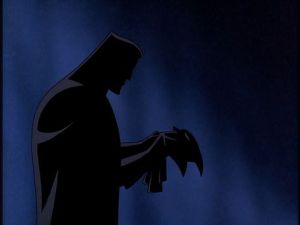 Bruce’s and Andrea’s circumstances and how they handled their pain were very similar. Both donned masks and disguises to fight against what they thought was evil. Both did it for the sake of their lost parents and extinguishing their pain. The defining difference between them though was the overall path they decided to walk down;  the fine line between simple crime fighting and murder. However, the line is thin as a thread and it is easy to be consumed by pain and hatred and become corrupted. As the films writer Michael Reaves put it “When Bruce puts on the mask for the first time, [after Andrea breaks their engagement], and Alfred says ‘My God!’ he’s reacting in horror, because he’s watching this man he’s helped raise from childhood, this man who has let the desire for vengeance and retribution consume his life, at last embrace the unspeakable.” Bruce’s decision never to kill is what most likely kept him from teetering off the edge. As Alfred said in the movie after Bruce loses Andrea the last time, “Vengeance blackens the soul, Bruce. I’ve always feared that you would become that which you fought against. You walk the edge of that abyss every night, but you haven’t fallen in and I thank heaven for that.”

Andrea Beaumont was broken by the death of her father and the terrible events that tore her away from Bruce and everything she loved. This heartbreak tore her to the point that she became willing to do anything, even murder, to shut out the pain she felt over what was lost, even if it meant destroying love. The conversation she had with Bruce embodies her state of mind the best:

“Andrea Beaumont: They took everything, Bruce. My father, my friends, my life, you. I’m not saying it’s right, or even sane but it’s all I have left! So either help me, or get out of the way!

Batman: You know I can’t do that.

Andrea Beaumont: Look what they did to us! What we could have had! They had to pay!

Batman: But Andy… what will vengeance solve?

Andrea Beaumont: If anyone knows the answer to that, Bruce, it’s you.”

To me, her story is far more tragic because she had forgotten how to live. She reminds me of Dantes from The Count of Monte Cristo (1844-1945), because in the end what did her revenge give her? For Dantes his vengeance brought him nothing but emptiness and unhappiness. Nothing had changed. Though his circumstances had shifted for the better and he gained so much, he couldn’t see beyond what he had lost. As his old companion Abbé Faria wisely said “Hatred is blind; rage carries you away; and he who pours out vengeance runs the risk of tasting a bitter draught.” As for Andrea, she lost love, she lost her chance at a peaceful life, and she lost the chance of rising above her circumstances and truly living because she chose to let them go.

When I saw this movie about a month ago I was intrigued when the Joker suddenly became a major character. Some would probably argue that he only appeared because they needed a familiar villain to raise the appeal of the movie. I actually found it refreshing to have him there pushing the plot forward. He is just one of those characters that you can’t help but love, no matter how much you hate what he does.

In my mind, the joker, voiced by Mark Hamill (Yes, the guy who played Luke in Star Wars), from Batman the Animated Series is the one and only joker. True, Heath Ledger’s portrayal is haunting, but he can’t replace the character embedded into me by my childhood. {As a side note that has nothing to do with this movie, the curved smile and facial expression of the joker was inspired by Gwynplaine from The Man Who Laughs (1928). You should watch it. It is a life changing movie. Here is a link to my review—–> LINK}

The animation is not much different from the 1990’s original series but that doesn’t mean it was not well done. Sometimes, I was actually shocked how immaculate some of the details were, especially in the scene where Batman sat and watched Andrea eat dinner with Arthur Reaves. The one thing that keeps me from giving it a perfect score is that it still felt cartoony and the animation was too simple at times, especially in the character design. However, I need to note that if I was reviewing the original TV show the score would be completely different. Compared to much of the animation done today, this movie is far superior because of how much time and effort its creators put into the animation, even though it was only supposed to be a simple movie adaption of a popular TV series.

When I finished this movie I felt so disappointed. Not because the story, characters or animation were horrible but because it was so tragic, without any point. It is different than The Wind Rises (2013), when Jiro stood among the ruins of his plane after his wife dies, having lost everything he had ever lived for. Yes it was tragic, but it still insisted that “We must live” even though life had been horrible. Life was still beautiful. Phantasm didn’t give any solution to overcoming suffering, rather it only showed the horrible effects of being consumed by hatred and caving in to sorrow. Perhaps I am being silly, but I cannot bring myself to really like this film because it makes me so unhappy. Do not take this score too seriously. This is a phenomenal animated film and I highly recommend you watch it and the original animated TV series.

FAVORITE QUOTE: Alfred: Vengeance blackens the soul, Bruce. I’ve always feared that you would become that which you fought against. You walk the edge of that abyss every night, but you haven’t fallen in and I thank heaven for that.