Behold! My last Avatar post. It feels somewhat melancholy to write this final one, but I know it is for the best. Part of this show’s charm is its humor, and I had such fun watching it with my brother Marty this last time. For this post, I limited myself again to only ten slots. Also, there will only be one funny moment per episode.

Little side note: talking about funny scenes is hard. I do not know quite how I will do this. Hopefully, my thoughts come across alright. 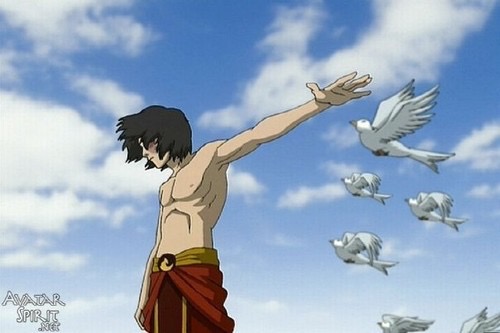 I could not decide between these two scenes, so I lumped them together. The first moment happened when Zuko threw off his robe, and doves flew behind him. He is quite the brooding, moody teenager. It makes fun of fangirl fantasies.

The second also involves Zuko when he walks in on Sokka lying on a floor with a rose in his mouth. The second Sokka realizes it was not Suki, he swallows the rose in fast motion. Good golly, I love his eyes when he realizes who had come in.

9. Aang’s Marble Trick and the Foaming Mouth Guy, Episode 4 “The Warriors of Kyoshi”

Heh. . . This is not one of my favorite episodes, but I love this short scene when Aang cries, “Now check this out!” and does his ridiculous marble trick. His facial expressions always crack me up, but the town’s reaction is equally hilarious. ESPECIALLY the foaming mouth guy. He makes another appearance in “Avatar Day” as well.

My brother and I replayed this scene too many times I think. But it never gets old! The funny little noise the bird makes when he plops onto Sokka’s head is golden.

Hey! We’re in enemy territory. Those are enemy birds.

6. Aang and Sokka act like noblemen, Episode 34 “City of Walls and Secrets”

I like the mystery and tension of this episode, but I also like this funny little scene where Toph tells the group they do not have what it takes to be noblemen. In response, Aang flings a robe over himself, bowing to each person in the group, even Momo. Sokka responds, “Avatar Aang, How you do go on?” and they embark on a silly bowing spree until they hit each other in the head.

Yes, fans wanted Aang to finally confess his love to Katara and were probably disappointed when it was all a daydream. However, I could not stop laughing after seeing it. Here is the conversation. I do not have the confidence to explain the whole thing.

Katara : Aang, staying up all night can’t be good for you.

Aang: Actually staying up all night has given me some time to think and I’ve realized some big things Katara.

Katara: Aang, what are you saying?

(Aang gives Katara a peck on the lips, then they start kissing passionately)

Katara: What are we doing?

Aang: What our hearts have been telling us to do for a long, long time. Baby, you’re my forever girl.

(Aang goes back to reality)

Katara: I was just saying you should take a nap.

Aang: Oh…I guess I kinda drifted off into a daydream.

Katara: What was your dream about?

I have no specific moment for this okay. All of it is hilarious. I love each character’s reactions to the horrible actors, the over-the-top special effects, the flying bald lady, and so much more. This play encompasses all the frustrations I felt watching the live-action version. Unfortunately, I think it might be better.

I fell in love with this scene a few weeks ago. There is just something about how Aang tries to act cool that I find funny. Perhaps it is how he slumps his back or even his conclusion at the end that maybe, just maybe, aloof does not seem to work for him. I think his first line, “So, papaya.” takes the cake, though. 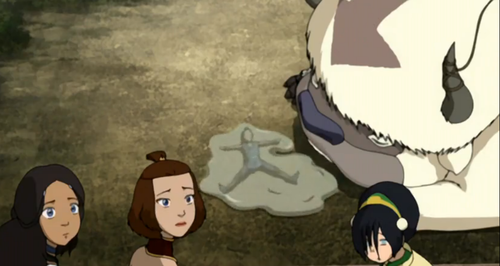 Oh no! I knew it was only a matter of time. Appa ate Momo!

I think it just how seriously he says it that gets to me. And how he slides down out of his mouth later in a pool of slobber.

1. Sokka separated from Aang and Katara, Episode 22 “The Cave of Two Lovers”

I think the nomads are the funniest characters, besides Sokka, in the show. My absolute favorite moment with them was right after the ceiling collapses and Sokka runs to try and dig his way out.

Oblivious to their predicament, Chong says,

Yeah, it’s no use. We’re separated. But at least you have us!

Sokka’s scream of anguish and furious scramble through the rubble afterwards seals the deal for me.

So that is the end of my Avatar posts. May your days be filled with laughter and insightful discoveries from here on out!