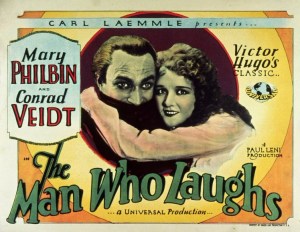 Based on Victor Hugo‘s 1889 novel L’Homme qui rit (1889), The Man Who Laughs is an American silent film directed by German Expressionist filmmaker Paul Leni during the transition between silent films and “talkies” (films with sound). I became interested in this film after I read a review by Roger Ebert, who portrayed it as “a melodrama, at times even a swashbuckler, but so steeped in Expressionist gloom that it plays like a horror film.” Victor Hugo’s original novel was written in 1889 after the French government exiled him from France because of controversial political content in his previous works Les Miserables (1862) and The Hunchback of Notre Dame (1839).

Victor Hugo is an interesting figure in literature and politics because he delved deep into subjects that are hard to understand. These subjects are the kind that question people’s comprehension of God, love, leadership, politics and morality: subjects people often avoid because it requires them to seriously consider their morals and past mistakes, yet they can’t leave entirely alone. He brought to light peoples’ inner demons and focused on how character and virtue make a man, or woman, great; not birth, position, or worldly accomplishments. This film unquestionably mirrored this same viewpoint and captured the inner struggle of a man ruled by his disfigurement; in how he was perceived as a freak by others and how he regarded himself in the same light.

The actors and actresses chosen for this film were phenomenal. Conrad Veidt, known for his role in other classic films like Casablanca (1942),  The Cabinet of Dr. Caligari (1920), and The Thief of Bagdad (1940) wore complicated dentures and wires to give him the horrible grin which served as the inspiration for the hideous smile of the Joker. He could barely speak while wearing them, yet even under such painful conditions he portrayed such powerful emotions both in his movements and his eyes. Mary Philbin also gave one of the most endearing performances in this movie, especially in how well she feigned blindness and emanated deep, powerful emotions. Also, Olga Vladimirovna Baklanova captured the twisted, sensual character Josiana very well. The cinematography is also stunning and matches the tone of the movie brilliantly, especially in the scene where Gywnplaine finds Dea near the gallows. Whenever I see it, I feel as though I am really there and can feel the oppressive winter try to claim my life.

From the beginning of the film there are events that carry that gloom and dark intensity that persists in what we call classic horror films (echoes of German Expressionist films), but there is also something far deeper. We are presented first with the tragic death of Lord Dirry-Moir and the fate of his son at the hands of King James II and the Comprachicos. To add to the cruelty of his father’s execution, they surgically altered the young boy’s face to have a permanent grin “to laugh forever at his fool of a father.” This sets in motion Gwynplaine’s story, our protagonist who is fated to live in a world where he would be rejected by almost all who saw him. In my opinion, this film is more about his struggle to understand himself and to accept his imperfections than anything else. Specific events in the movie are essential for him to obtain the necessary experience needed to foster such self-awareness, however they center on the defining difference between pure love and licentious physical desire. At the center of his life came Dea, a woman he had found in the arms of her dead mother when he, still a child, saved her life. He grew to deeply love her, and she him. But he would not marry her because he feared her rejection of when she realized what he really looked like.

Then he found what I thought to be his redemption. A woman, a dichess expressed her interest in him and wanted him to visit her. Though warned, he goes to see her to see if there really could be a woman who lives him despite his looks. If that were so, he reasoned he could marry Dea. He went to the duchess and faced the depths of lustful deception. 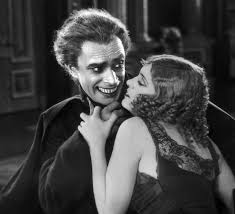 Gwynplaine started to change after his encounter with the Duchess Josiana. There he saw the ugliness within himself when faced with her lustful intentions. His desire to meet with her wasn’t perverse, rather, he wanted to see if there could be someone who loved him even after seeing his face. If that were true, then he would have the right to love Dea. What he didn’t realize was the tumultuous situation he would be placed in. Immediately when he crossed into her room he became the victim of her lustful desire as well as his own mortal limitations. In his eyes, you can see his sexual desire for her, however, more than anything he was repulsed, and even terrified of her and the horrible feelings awakened in him. It was clear that he didn’t want to be touched by her that way, yet hope and physical desire kept him rooted there. When he fled from her room as she laughed at him he was crushed by her cruelty. He stated with a broken heart, as if his final hope had been destroyed, “She laughed like all the others”. 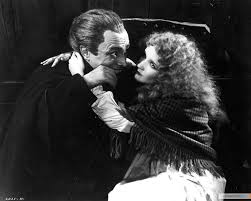 Many remember the fore mentioned scene and forget what occurred almost immediately after when he met Dea on the steps of their caravan. What transpired between them directly contrasted his time with Josiana because love, not lust, was the motive force between them. What he had feared their entire relationship was Dea’s rejection. She loved him so devotedly, yet, though he loved her dearly, he could never feel worthy of her because of his deformity. Despite these fears he carried, after his horrible experience with Josiana he made a life-changing, rash decision. After Dea awoke and felt him at her feet, he took Dea’s hands and placed them on his face, as if he finally had the courage to see if she could still love him, even knowing about his monstrous appearance. Being blind, she could only rely on what she could feel with her hands. Whether she understood the extent of his deformity is unclear, however what mattered was how she cherished the trust and love he showed her. Lovingly, she told him “God closed my eyes so I could see only the real Gwynplaine” and naked relief and ecstatic joy replaced the fear and horror he had felt only minutes before.

Every time I watch this scene I am brought to tears. Too often people revel watching others cave in to lustful desire and ignore beautiful moments such as this, calling them childish and unrealistic. I think it is foolish to believe that by glorifying the loss of virtue is classy and cultural. It is rare to find stories like this, where people still believe that love is something other than a carnal desire that can be used without negative consequences.

Even more surprising than this encounter is the film’s conclusion. Though he was given a place in the House of Peers and the chance to marry Josiana, he rejected their plans for him. Living in that world, living away from the Dea, would be the end of him. Such a life would keep him from ever seeing himself as a equal human being. It seemed too cruel to watch as the House of Peers laughed at him as he refused to enter into the marriage, yet it was then that everything became clear to him. He exclaimed, perhaps the first time as a man and not as a laughable, tragic figure “A king made me a clown! A queen made me a Peer! But first, God made me a man!” From thence he escaped and joined his comrades on a ship leaving England. Unlike the original story, he was given a chance at happiness. However, such happiness came at a high price and with much effort.

How do we distinguish between great films and forgettable blockbusters? It is when filmmakers go beyond telling stories of tragic figures and cliche romances. It is when they tell you the story of a man who allowed himself to love, who found the courage to stand against cruelty, and who triumphed in the end against those who thought they could control his life. Such masterpieces praise love rather then lust, and make it clear that there is a difference between the two. However, they still show that people are flawed and prone to temptation. When I watch this film I don’t see a tragic, deformed figure, like Quasimodo or the creature in Frankenstein. I see a man who changed and came to understand that true beauty is found within. Would I recommend this film? Yes, I  recommend it wholeheartedly. Don’t label it and dismiss it because it is a silent film. There is such beauty to be found in this film if you are willing to take the time and watch it unfold before you.

FAVORITE QUOTE:  “A king made me a clown! A queen made me a Peer! But first, God made me a man!” 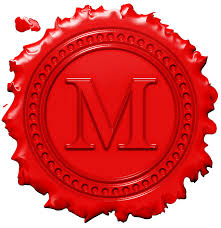