Disney released this film into theaters 1989 after a long period of critical, commercial failures . It marked the beginning of the Disney Renaissance where beloved films such as The Lion King (1994), Beauty and the Beast (1991), and Tarzan (1999) have received critical acclaim. I have often asked myself “Why was this film so ground breaking?” When I watched it recently, I wondered again why so many people have negative opinions of it. Many have complained to me about their hatred for the heroine Ariel and about the movie’s “cliched” plot and ending. As for myself, I have never looked at The Little Mermaid that way; in fact I really enjoy watching it.

One myth that has embedded itself into popular culture (probably because of Disney films), especially in the United States, is that all fairy tales end happily with a prince and a princess falling in love and riding off into the sunset. Whenever I hear someone in a song, a book or real life talk about their perfect fairy tale ending I stop and think. Most fairy tales were written to scare children or show them the true nature of evil (not unlike the boogie man stories we were told as children). Some, like Little Red Riding Hood, were written to warn children to be wary of sexual predators and strangers. Others like The Singing Bone tell of the detrimental effects greed and jealousy had on two men who killed their younger brother. As for The Little Mermaid, written by Hans Christian Anderson in 1837, the mermaid lost her prince to another woman and after refusing to kill her beloved she drowned herself in the ocean out of loneliness and despair. That said, it is easy to staple this movie down as a fantastical forbidden romance or whimsical fairy tale. However, there is so much more to it. True, there is romance and yes it is based on a fairy tale but that isn’t what defines it.

The story line is fun and energetic and plays homage to classic Disney movies like Snow White and the Seven Dwarves (1937) and Cinderella (1950). How? It shows us something magical. I like how this film opens because it pulls the audience from the world above the sea, in a ship among humans we can associate and understand, into the bright, vibrant kingdom of King Triton and the mermaids; in other words, it shifts from the familiar to the extraordinary. One thing that concerns me about more modern fairy tale films like Shrek (2001) and Frozen (2013) is the magic that is lost in trying to appeal to modern audiences. I have noticed that many today are cynical of films like Snow White and Sleeping Beauty (1959) because they aren’t realistic, but I tend to like those older films more. When I watch a movie I don’t want to see the breakdown of such magical stories to crude jokes and modern mannerisms. I want to be taken away somewhere I have never seen. I want to believe in true, beautiful love. I also want to know evil can be overcome because of that love. Perhaps I am old fashioned but this is what I look for. One of the reasons that I think The Little Mermaid was so ground breaking is because it had that feeling of wonder and magic that had been lost for many, many years.

To modern audiences, it is comical to watch her be misguided by Scully the seagull when she finds human “treasures”, yet her insatiable hunger for knowledge of our world is not unlike our fascination of different cultures and people. Though we are drawn to the unknown world under the sea, Ariel was dissatisfied and instead fascinated with the human world. It is captivating how after she sang “Part of Your World”, longing to be able to see the human world and shake the dissatisfied feelings she carried, her entire life was changed with one encounter. For me, her meeting with Prince Eric helped place her onto a path of needed change. This wasn’t just a typical story where a silly teenager developed a crush. Her love for Eric grew and flourished as she fought to gain his heart and break the ecological barriers between them. (She actually went and did something!) What also impressed me is how much Ariel and Eric sacrificed for one another. Because of these sacrifices, their relationship felt more genuine rather than a fluttery enchantment.

One thing I also noticed was the complicated relationship between Ariel and her father King Triton. Perhaps it is because of how much I love my father, but I have a soft spot for father-daughter relationships in books and movies. One of my favorite parts is near the end during her wedding when she embraced her father and told him she loved him. I get a similar feeling of contentment when I watch Mulan (1998) and see her father take her into his arms when she finally returns home. I think it was important to include this element in the story because it portrayed a relationship that had tensions but still endured even with their differing opinions and ages. It also showed how hard it was for her father to give her to another man and let her live a different life. 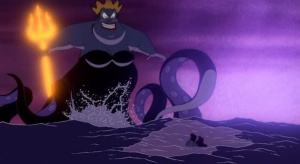 Disney Animation studios went through a period through the 70’s and 80s’s where the quality of their animation suffered. Don Bluth, the director of The Secret of NIMH (1982) and The Land Before Time (1988), had left Disney because the animation studios had in a way forsaken the classical animation style for an easier more cost effective way of producing films. For myself, his dissension from Disney matched the feelings of many who remembered how beautiful and mystical animated films used to be. The Little Mermaid brought back breathtaking animation and added vibrant color and texture to the aforementioned old style. A mark of a good animated film is also its ability to show the audience something they have never seen before. I am always blown away by the shipwreck near the beginning and Ursula’s transformation into a titan because the ocean looks as though it is alive. The feeling of excitement I have when I see those scenes reminds me somewhat of the apprehensive sensation I have when watching the whale scene in Pinocchio (1940). All in all, the animation is a masterpiece because of its high quality and depth.

From the beginning to the end this movie feels so alive. From the witty soundtrack written by the famous composers Alan Menken and Howard Ashman, to the colorful, brilliant animation, the journey is always fulfilling for me. I still laugh at the witty comments Sebastian makes, smile at Ursula’s magnetic, evil characteristics, and feel satisfied when Ariel and Eric finally marry. It is a wonderful part of my childhood but I don’t think it should be limited to children.  For me, seeing an animated masterpiece like The Little Mermaid is the same as walking underneath the Sistine Chapel or being in the presence of the beautiful sculptures of Gian Lorenzo Bernini. Films like this are a very rare and very precious part of film history.

Sebastian: Like I always say, Your Majesty, “children have got to be free to lead their own lives.”

Triton: You always say that?

Sebastian: And what’s that, Your Majesty?

Triton: How much I’m going to miss her.