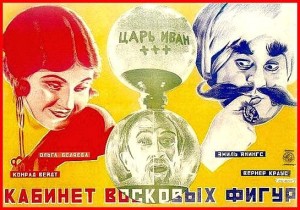 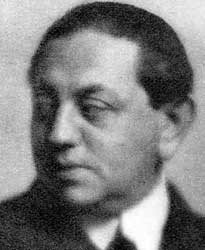 Paul Leni, or Paul Josef Levi, studied at the Berlin’s Academy of Fine Arts, as a painter, and then joined the theater as a set designer throughout multiple Berlin theaters. A former Reinhardt collaborator, his work in the theater transferred to film set and costume design in 1913. Three years after Leni worked as art director on stage-director Leopold Jessnor’s Backstairs (1921), the UFA commissioned him to direct Waxworks, a fantasy story surrounding three wax figures from different periods and countries. Primarily a designer, Leni employed the familiar fairground ambience seen in Caligari to establish a mysterious atmosphere, well aware of how effective varying costume and set design for each story would be. Waxworks emphasized inanimate objects lifelike qualities, the concept of space as a film technique to exemplify the character’s state of mind, and the use of a story within a story to show how the superficial mirrors reality. In other words, Waxworks actually reflected the role of tyrants in society through Leni’s stylized sets and actors. The first story centered on Harun with his bombastic mannerisms as a representative of the capricious nature of tyrants. The second focused on Ivan who illustrated the cruel and licentious nature of tyrants. Finally, the dream sequence featured Jack the Ripper in his perturbing, composed fortitude as a forbidding representative of modern tyranny.

The film opens with a poet wandering into a lively fair looking for work. A museum director hires him to write stories for three of his wax figures: fifth Abbasid caliph Harun al-Rashid, the Tsar Ivan the Terrible and infamous serial killer Jack the Ripper. Each of the stories successively embraced more and more Expressionist themes until the movie peaked in the dream sequence when the wax figure of Jack the Ripper came to life, chased the poet and his love throughout the museum and killed him before he woke up frightened in Eva’s arms. The poet and Eva, especially in the first story, looked like stage performers befitting characters displaced in obviously divergent locations and historical periods. Though the poet and Eva act like the main characters, the story centered on the wax figures. Also, throughout each episode, the scenes were tinted different colors to represent different times of day or moods, depending on the story. 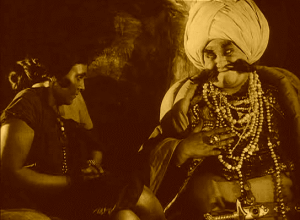 Harun’s episode opens on the palace roof with a chess game between Harun and his Grand vizier. Situated next to the walls of the palace, Assad the baker (the poet) busily bakes while his flirtatious wife (Eva) watches him through the window. The smoke from his ovens travels upward and Harun, having lost the game, blames Assad for his loss and orders his vizier to find him and behead him. Once the vizier finds Assad, he sees his wife through the window and returns to Harun with tales of her beauty. After Assad leaves his wife to prove his worth as a man by stealing the Caliph’s wishing ring, Harun steps into the house and tries to court her while her husband is away. All turns sour when Assad, mistaking a wax figure for the Caliph, allegedly kills him and takes his ring, consequently having to flee for his life from the palace guards. When he returns to his home, his wife hides the Caliph in the oven until, in order to save her husband’s life, she wishes for the Caliph to appear and make Assad his royal baker. 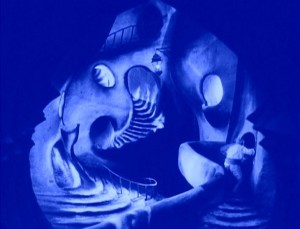 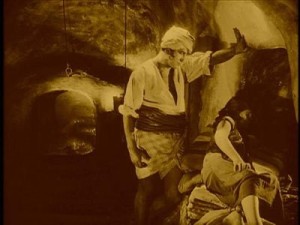 More lighthearted in appearance, Harun al-Rashid’s story used Expressionism primarily through its settings. Set to match its ridiculous, overweight star, “the puffy dough like settings . . . are full of rotundities and cockled walls and seem to have no interior framing”.[1] Almost like the interior of an animal shell, the settings emit a foreign, unfamiliar atmosphere which spirals and curves in a manner that is discomforting and inconsistent. It is obvious from the beginning that the Caliph’s world is not real, and the set designs require the characters at times to stoop, make jerky movements or broken gestures, highly valued by Expressionist’s for their angles and curves. This displaced the main characters and most importantly reflected Harun’s inconsistent personality. 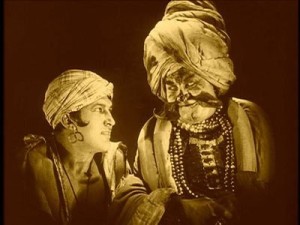 Jannings, a later star in famous films like Murnau’s masterpieces The Last Laugh (1924) and Faust (1926), represented well Harun’s ridiculous whimsical personality. The least formidable figure of all three stories, the story effectively ridiculed the petty manner of tyrants by illustrating the ridiculous nature of his decisions. Placed farthest from the present, Harun at one moment harsh and another accommodating “made passes at pretty women, in a fit of temper (ordered) innocent people beheaded, (and) a moment later magnanimously (pardoned) unpardonable crimes” represented no real threat, and even provided a happy ending for the main characters.[2] 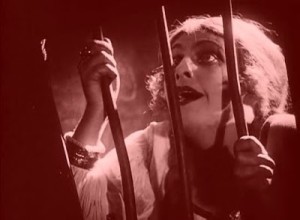 Infinitely more sinister than the first story, Ivan’s episode starts in his torture chamber where a man hangs close to death. Entranced by the man’s suffering, Ivan holds an hourglass created by his poison mixer, which foretells the death of any name inscribed on it. Ever conscious of his life, Ivan orders one of his servants to kill the poison mixer, who had taken pity on one of the prisoners. Ivan meets a nobleman who invites him to his daughter’s (Eva) wedding. Paranoid, Ivan orders the man to switch cloths with him on their journey to the ceremony. Consequently, an assassin kills the nobleman, mistaken for the tsar, to the shock and dismay of his daughter and the other guests. He orders the guests to continue the celebration, despite the nobleman’s death and after the bride leaves to grieve over her father’s body, the tsar captures her and takes her and her groom (the poet) to his palace. With her husband placed in his torture chamber, Ivan takes her to his bedchamber, fully intending to make her his mistress. However, before he can carry out his ill intentions, his servant tell him the poison mixer betrayed him. After he rushes to his torture chamber, he finds a large hourglass with his inscribed name on it and goes insane as he flips it repeatedly to prevent his death. 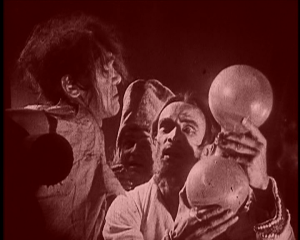 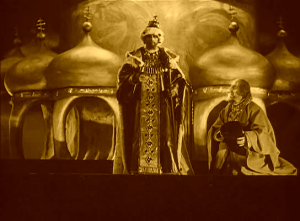 Ivan the Terrible’s story illustrated through its sets his subjects’ discomfort, designed in a way that dissuades any from escaping. Though most other silent films used coloring to evoke different times of day, the coloring throughout Ivan’s story denoted the moods in each of the settings. Throughout his palace, yellow disguised his secret torture chamber, and his love for human suffering. His torture chamber, a deep crimson red, had low ceilings, one short barred door, no windows and an ominous staircase that lead to his victims, elevated in various painful positions. By implementing “this movement restricting architecture. . . whose ominous walls make the lack of space even more stifling then before”, Leni created an atmosphere that cemented Ivan’s control over all in his world.[3] 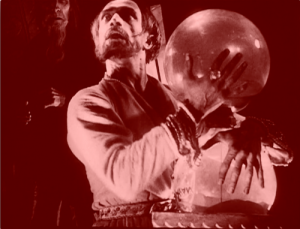 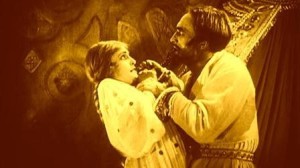 Conrad Veidt gave the most memorable performance of the film in how he captured Ivan’s abnormal cruelty. His movements purposeful and facial expressions entrancing, he effectively represented a tyrant teetering on the edge of conscious malevolence and insanity. “An incarnation of insatiable lusts and unheard cruelties”, Ivan took pleasure in the suffering of others and devised innovating “physical and mental tortures” to test on his victims, all moral sensibilities long ago extinguished.[4] His fear of death and the consequences of his actions finally defeated him. He showed that eventually by their cruelty and bestiality tyrants would instigate their own demise. 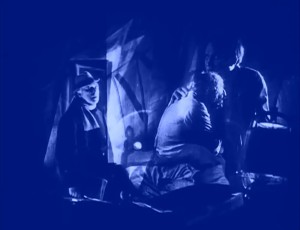 Jack the Ripper’s story begins when the poet falls asleep and dreams that Jack’s wax figure comes to life, determined to kill him and Eva. Fleeing with Eva through the museum, turned into a house of mirrors and illusions, Jack follows them slowly, patient and confident in his victory. When they stop in one of the rooms, believing that they had lost him, the poet embraces her and they explore the museum. As Eva playfully tries on a fur cape in one of the rooms, multiple visions of Jack surround her and the poet, in an attempt to protect her, is stabbed through the chest before he wakes up in her arms. 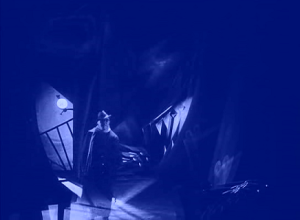 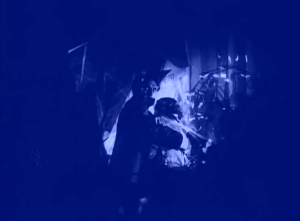 Jack the Ripper’s short episode is the most expressionist of the three, heightened by dark blue frames. Leni designed this 4-minute sequence, which Kracauer believed, “counted among the greatest achievements of film art”, differently than the previous two stories.[5] Leni did not rely on stylized architecture, but had the backgrounds match the poet’s dreamlike perspective. The museum alive, constraining, and transparent emphasized the hopelessness of their flight, “threatened by doom on either side, tossed about in gloomy space like the phantom ship in Nosferatu”.[6] For Jack’s story represented the imminent present, which explained why, in comparison to the other stories, the poet was so frightened. 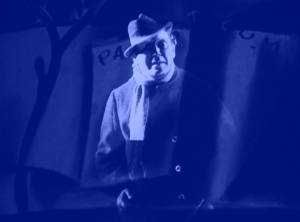 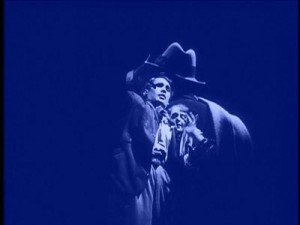 Jack’s story is the most important sequence in Waxworks because it represents modern tyranny. Werner Krauss, who also played Dr. Caligari, had little to no expression through the whole scene and governed the chaos that surrounded the poet and Eva easily. With images from the haunted fair blending into the museum’s corridors and rooms, every second of the sequence embodied “the interpenetration of chaos and tyranny” its monster Jack walking through the frenzied environment with suave forbearance.[7] Having been active only 36 years before in 1888, Jack the Ripper’s terrible murders were still fresh in European’s minds. He also appeared in a later German film, Georg Wilhelm Pabst’s melodrama Pandora’s Box (1929), where its protagonist Lulu, driven to prostitution in London, unfortunately invites him to her quarters and becomes one of his victims. In each of the stories, he represents the despairing environment Germans’ live in and their inability to escape from contemporary oppression. 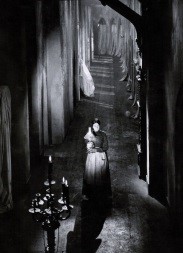 Corridor in The Cat and the Canary 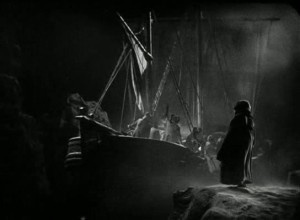 Gwynplaine standing on the harbor, The Man Who Laughs