“I wanted to create something that is realistic,

I have been a fan of Hayao Miyazaki’s work for five years {since I was seventeen}, longer if you count the many hours of my childhood spent watching one of his first films My Neighbor Totoro (1988). Miyazaki-san announced that this was to be his last film. To me and many others this is tragic. So many times I have been carried away by his beautiful stories and visions of humanity. Every time I watch his movies, whether it is Howl’s Moving Castle (2003), Princess Mononoke (1997), or Laputa: Castle in the Sky (1986), I see something I never noticed before and its magic continues to live on inside me. To call him a genius would be an understatement. He writes, directs and designs {paints, draws} all the storyboards and character designs himself for each of his movies. The reason? He loves what he does.

The Wind Rises is different from all of his previous films because it is the most realistic. There are no spirits, magical creatures or wonderful castles in the sky rather there are simply human beings living in Japan during the inter-war period. So, in the year the world was introduced to the magical, musical spectacle Frozen, the funny sequel Despicable Me 2, and the family fun film The Croods how does Miyazaki- san’s final work compare? That is an excellent question.

It is truly a miracle that I finally watched this film. It had a limited theater release due to multiple controversies in Japan and the United States over its content and message. Its English production, though still technically done by Disney, was handed to a secondary company Touchstone after they realized it needed a PG-13 rating. . . still haven’t figured out why that is. {Touchstone was also used for the first release of The Nightmare Before Christmas (1993) because Disney producers didn’t want it to reflect badly on Disney studios if it turned out to be a flop or too controversial. Oh the irony.}

At the Oscars, it was passed by for the more popular film Frozen, even though most of the judges had not even seen all the films and half of them abstained out of a lack of interest. Within a year it will fall into relative obscurity and those who did know it existed may well forget about it with the new films and popular releases this year. As for myself. I will never forget it. I can’t. I doubt I will be able to do this film justice in this review, but I believe that by writing my thoughts down I can show my gratitude and admiration for Miyazaki-san’s amazing work of art.

The story begins in the simple dream of a young boy named Jiro Horikoshi, who loves airplanes but can’t pilot them because of his poor eyesight. Through a series of dreams he meets his idol Caproni and decides to design airplanes, or as Caproni calls them dreams come to life, as an aeronautical engineer.

Five years later Jiro is shown headed on a train for his university, still living for his dream and meets a young girl Naoko Satomi, who catches his hat as the wind lifts it up, traveling with her maid to their home in Tokyo. Their acquaintance is extended after the terrible Great Kanto Earthquake of 1923 hits the train and her maid is badly injured. He helps them to reach their family and leaves without leaving his name or contact information. He goes to work for an aircraft manufacturer Mitsubishi, and travels to Germany and many other places around the world to study airplane designs.

Each of these steps leads him closer and closer to his dream of building his airplane, however after one of his designs fails he travels into the countryside to recover from his disappointment. Such a failure leads him back to Naoko, whom he falls in love with. Due to her poor health (she has tuberculosis) they postpone their wedding until she can get better. After her health worsens they decide to marry and spend her precious remaining time together. As chief engineer he finally finishes the design for his plane and leaves Naoko for the test run. As his plane takes off in a beautiful successful flight, Naoko leaves on a train and dies.

At the end of WWII Jiro stands in a dream midst the broken remains of his planes, all of which were lost because of the war. Caproni tells him that his dream was realized and still beautiful, though it seemed to have been destroyed by the horrors of war and men. Naoko tells him to continue living as the wind rises and takes her away towards the sky and his planes.

The story centers on dreams to be sure, but it also focuses on living: living through a time of tragedy, living for a loved one, and living for a dream doomed to be exploited. Watching Jiro as he grew from a boy to a young man I marveled at his genuine love for others and kind demeanor. At a glance he is no one extraordinary, yet for me, he was one of the most inspiring heroes and men I have ever seen in film.

The Wind Rises is about this man and how he lived his life to its fullest potential. He loved, he cried, he dreamed and yet for all his kindness and passion he lost everything to the times he lived in. . . or so it seemed.

This film teaches us that we must live, though there will be war, famine, grief, loss, hatred, death, violence, illness and pain. What do we gain by enduring these things and dreaming despite them? For Jiro he found an irreplaceable love and created something extraordinary. Yes, it seemed like he lost both his dream and his love, but in the eternal perspective this is not so. Memories of such experiences live on forever and so does genius.

When people think of true love I wonder what they picture. Most of the time I wonder if we are bombarded with deceptive portrayals of love. I know that many who work in the film industry overturn humble, precious moments for more dramatic, flashy or sexual scenes from movies like Titanic (1997), Gone With the Wind (1939), or How to Lose a Guy in Ten Days (2003). The answer as to why is simple. It produces money.

For me, I remember scenes like the unforgettable encounter between Gwyplaine and Dea from The Man Who Laughs (1928), Tarzan and Jane’s first meeting from Disney’s Tarzan (1999), and the Beast’s death and transformation in Disney’s Beauty and the Beast (1991). The love in these feels more real to me.

Jiro and Naoko’s love story touched me deeply. No, it implanted itself in my heart. It was real and powerful. Seeing them made me believe in eternal love. Seeing them made me think “What does it mean to truly love someone?”. Such a relationship lives on forever and endures beyond aging and death. As the wind rose and carried away beautiful airplanes, hats and umbrellas so it seems love lifted them heavenward, into the realm of everlasting joy and fulfillment.

There was one scene in particular that stuck out to me. In it, after receiving word from his work supervisor that Naoko had had a lung hemorrhage, Jiro fled onto the earliest train possible to reach her. Fighting tears he rushed to her side and when he saw her through her bedroom door he cut through the gardens, kicked off his shoes in a frenzy and tenderly embraced her. This moment, caring and awe inspiring, illustrated his utmost devotion to her, no matter the time or sacrifice. 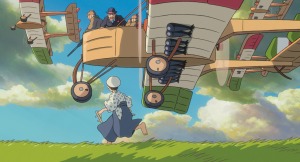 Never before have I encountered a story like this one that is so beautiful, yet so simple. There is an ebb and flow to it that effortlessly transmits viewers calmly through each point of the story. Whether it was Jiro’s encounters with Caproni in his dreams, the terrifying earthquake and fire that destroyed Tokyo in 1923, or Jiro’s walk with his friend Honjo through the streets of Germany the plot was never forced or victim to sudden confusing changes. The characters were not characters to me. They were people. That is the magic of Hayao Miyazaki’s movies. He never just creates characters that could be seen in any other film or book. They are never arbitrary because they remind us what it means to be human.

Its animation was done brilliantly and shone with life and depth. As in all his animated films, the attention given to the smallest details {in even the movement of grass blades and people moving in the backgrounds} was astounding.

So much is lost when people become so focused on being entertained {and keeping others entertained} in films. It is as if the characters have to be in constant motion the whole film. In my mind, It is in movies like Life of Pi (2012), where a scene depicting the overhead view of a boy on a boat in the still ocean has more meaning than a car chase in an action film, and The Wind Rises that true artistry is found in the still, quiet moments.

It doesn’t matter if an artist is a painter, a musician, a dancer, or a film maker; what makes their works memorable is the heart they put into it. How do we know a masterpiece when we see one? Is it because someone tells us it is so? That only works in the temporal setting. In the eternal sense, masterpieces are the epitome of the artist’s creative powers. They speak to us in ways that words alone can not. They are pieces of the human soul, an artist’s dreams come to life.

I have said this before, but I believe that animated films are like moving paintings, accompanied by a musical score and highlighted by a story and its characters. There are some I would call true works of art, though many are not recognized as such.

Miyazaki-san became inspired to make this film after reading a quote from Horikoshi, the original designer of the Mitsubishi A6M Zero: “All I wanted to do was to make something beautiful”. There will be those who criticize this film because its protagonist designed war planes and others for its political implications. If I have learned anything from watching Miyazaki-san’s films it is that his movies are never pretentious and they never celebrate war or those who glorify their creation. Perhaps we must look beyond its surface. Just like in The Book Thief (2005) people are always more than the country they live in or the times they are subject to.

This film is one of the most beautiful things I have ever seen. If you have not watched it you need to. Watch it in solitude and wait for its magic to unfold before you. I cried, I laughed, and I was reminded what it was like to dream and live. This is a masterpiece and will endure. While watching it ask yourself two questions. First “Is the wind still rising?” and second “Do you prefer a world with pyramids, or without pyramids?”

Caproni: “But remember this, Japanese boy… airplanes are not tools for war. They are not for making money. Airplanes are beautiful dreams. Engineers turn dreams into reality.”

Jirô Horikoshi: Who has seen the wind? Neither I nor you: But when the leaves hang trembling, the wind is passing through.