Because of the Dawes and Young Plan, which relieved war reparations, Germany after 1924 went through a small golden age. Consequently, the Expressionist Movement began to decline, eclipsed by the rising American film genre. Impressed by German techniques and films, American producers hired as many Expressionist filmmakers, designers, makeup artists and technicians they could get their hands on and the “character of German film dissolved into thin air like the vampire in Nosferatu”. [1] Few directors made critically acclaimed German films, especially German Expressionist films, from 1924-1932 because America had become the new center for artistic films. Some films like Pandora’s Box (1929), Diary of a Young Girl (1929), and M (1931) became critical successes but most German films ironically copied American films, which had integrated original techniques and styles from the early German Expressionist film era. Unfortunately, by 1927 the “German Artistic Cinema came to renounce the very qualities which gave it its value”.[2] After 1927, Metropolis’s production bankrupted the UFA and the once proud studio was purchased by Alfred Hugenberg, a future supporter of the Nazi movement and Hitler. In 1932, Joseph Goebbels began to slowly take over all facets of the film industry bringing a new age of film during the Third Reich, the visions of the German Expressionist era transferred and lost to Americanization and the Nazi takeover. Goebbels banned films like Caligari from the German cinema, which contradicted the realistic, straightforward genre he and Hitler envisioned.

Though the German Expressionist era was short-lived, its pervasive influence on world cinema remains timeless. Caligari’s sets and dark themes influenced future filmmakers like Tim Burton, which culminated profoundly in The Nightmare Before Christmas’s (1993) sets and Edward’s design in Edward Scissorhands (1990). 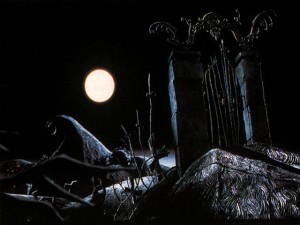 (Scene from the Nightmare before Christmas)

Cesare from Caligari and Edward from Edward Scissorhands

Nosferatu greatly influenced the production of Dracula (1931), which sparked the American horror film genre, many of its scenes like The tied figure of the captain on the haunted ship copied from Murnau’s original film. Waxwork’s section on Harun al- Rashid influenced in its themes and conception Douglas Fairbank’s The Thief of Baghdad (1924). In addition, one of Waxwork’s actors William Dieterle later directed critically acclaimed American films like The Hunchback of Notre Dame (1923) and The Life of Emile Zola (1937).

The Thief of Baghdad

The Hunchback of Notre Dame

As for Metropolis, it has become one of the most iconic films in world cinema and has influenced countless movies like The Bride of Frankenstein (1939), Blade Runner (1982), Dr. Stranglove (1964) and The Fifth Element (1997) and even Batman’s Gotham City. 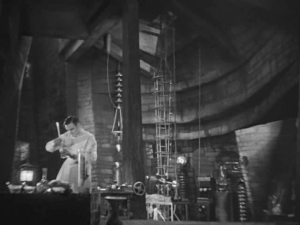 Laboratory in The Bride of Frankenstein

Paul Leni described in an interview in 1924 his vision for Waxworks, which effectively embodied the universal goal his counterparts in the German studios throughout the 1920s:

For my film Waxworks I have tried to create sets so stylized that they evince no idea of reality. . . It is not extreme reality that the camera perceives, but the reality of the inner event, which is more profound, effective and moving than what we see through everyday eyes. . . I cannot stress too strongly how important it is for a designer to shun the world seen every day and to attain its true sinews. . . he must penetrate the surface of things and reach their heart. He must create mood (Stimmung) even though he has to safeguard his independence with regard to the object seen merely through everyday eyes. It is this which makes him an artist.[3]

Above all, The German Expressionist film era represents a time in world cinema where people through the Filmwelt worked together to create wholly artistic films. Inevitably, these films reflected Germany’s torn state of mind, however in the process they brought films onto the level of a fine art and profoundly indefinitely changed the face of world cinema.