Though this is one of my favorite paintings, I know nothing about who made it or even the company involved. My mother told me about it . She explained to me that when she was younger she had this painting on her wall in her room, having found it in an advertisement for . . . I do not remember. Wanting to get her a present for her birthday, I searched and searched for even a copy of the image she described and finally it paid off after hours of looking. Did I ever get it for her? Well. . . no. It proved to be impossible. I doubt any one who reads this post has ever SEEN this image before. Perhaps you might have seen its likeness. 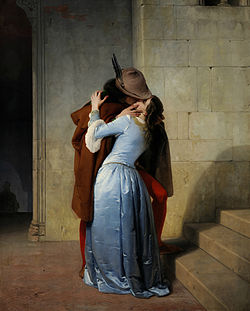 There is something about this specific image for me that sets it apart. The idea that the artist is unknown actually intrigues me. It means I have found a hidden work of art. Now why do I admire an unknown advertisement painting? Firstly, it appeals to me as a musician. You may not known this, but I play several instruments (piano and oboe), have seventeen years of music experience, studied two years as a vocal performance major in college, and recently taught middle school music (though I graduated in history). So, as you can see, the musician in me can only imagine the hidden meaning behind this scene. I always imagine a husband and wife playing together and sharing a simple romantic moment, moved by their own music.

Secondly, the colors suggest this scene takes place at night, which gives the couple an even deeper disconnection from the rest of the world. Victor Hugo wrote in his famous novel Les Miserables (1862),

Seeing this image, I have to wonder how love can make it seem like everyone else in the world has disappeared. This painting seems so special and sweet.

Lastly, this painting reminds me of my mother. She has told me about so many different things from her childhood in New York. Her description of this simple painting made me think that amazing things can be found in the most obscure of places. I know I have not said a lot about this work, but this time I think it would be better to study this simple painting on your own and come up with your own interpretation of its meaning.