(Concept art for Bronogh (pronounced bro-nuh) by Tomm Moore, The Song of the Sea) 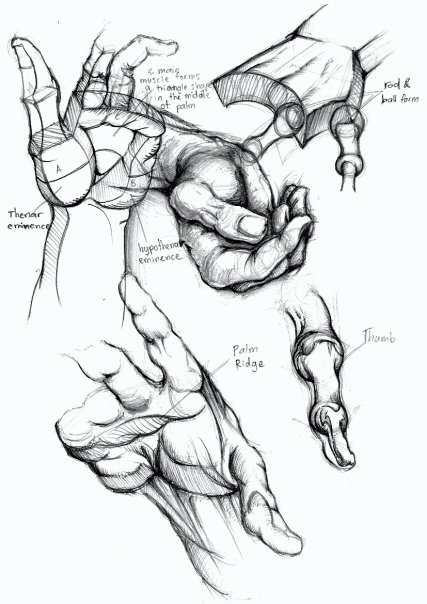 I am so sorry it has taken this long for me to finish this post. School has been busy and tortuous so by the time I get home I am too exhausted to make an attempt at writing. Most of my posts are done in one day and then I edit them multiple times to take out the kinks so stretching a project over several weeks or days does not compute with my single-minded brain.

This next list is my next ten favorite animated character designs starting with none other then Baymax from Big Hero 6 (2014). 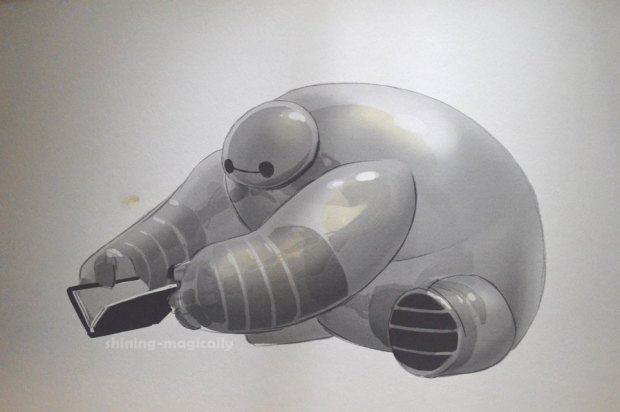 I will get right to the point and say that my love for his design is because he is round. More so then Wall-E, he is beyond adorable, huggable and lovable. The plush, vinyl outlaying of this “personal healthcare companion” is actually based on real robotic arms, prototypes for new aesthetic approaches to medicine and healthcare. He is easily compactable and has a skinnier skeleton within his robust exterior to ensure comfortable care. Most of my love for him comes for his rotundity. One of his outfits, the samurai, just had my mother and I on the floor laughing. When he ran I almost died! I think several people looked at us in the theater funnily. Character design for this movie is still very unclear to me so I cannot pinpoint a specific designer. One, whose name came up many times, is Shiyoon Kim so I would assume that she did much of Baymax’s design.

Meant to look like a miniature Chinese dancer, the smallest mushroom in Fantasia‘s short dance sequence has always been one of my favorites. Childlike and caught in a frenzy of the other taller mushrooms, the littlest dancer keeps the attention of the audience. It represents, since Disney animators based all of the Nutcracker dances on real ballet sequences, the principle or main dancer albeit a comedic one. Art Babbitt was the principle animator for this scene and I love the look of the characters and their movements. The reason I single out the smallest mushroom is because its appearance is rounder and more playful then the others. Also, he is just so cute the way he runs and dances around the others confusedly. Fantasia is one of my favorite movies, the design of the characters and scenes being one of the principle reasons why. 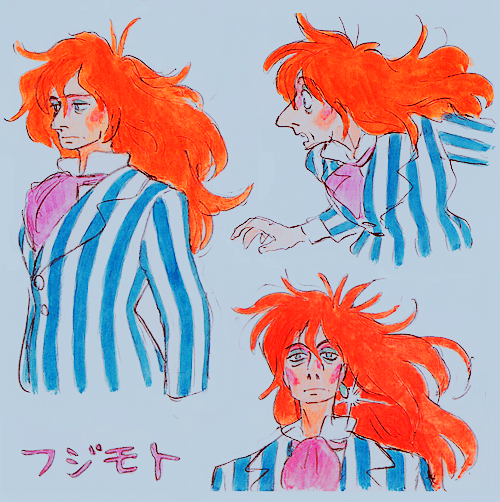 Here is yet another Studio Ghibli character. His designer is once again Hayao Miyazaki and he was based off Miyazaki’s boss and co-worker, specifically for his bigger nose and personality. When I first watched this film several years ago, I remember that I liked his suit, which looked sort of like a barber shop quartet costume. He is also not traditionally handsome, which appeals to me. The reason I like him so much as a character is because his facial expressions are always changing and it always seems as though he is the only one panicking as the world is coming to the end. He WANTS to be taken seriously, however, his daughter Berhilde (Ponyo) thinks he is bossy, Sosuke’s mom thinks he is killing plants and is a creeper and his daughters refuse to take his instructions seriously. I also REALLY like his red hair. It has such a deep, expressive color to it. 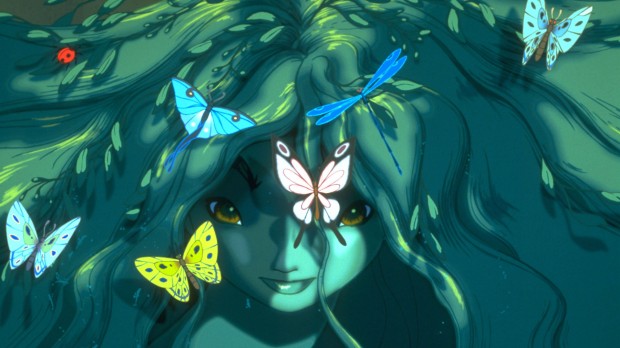 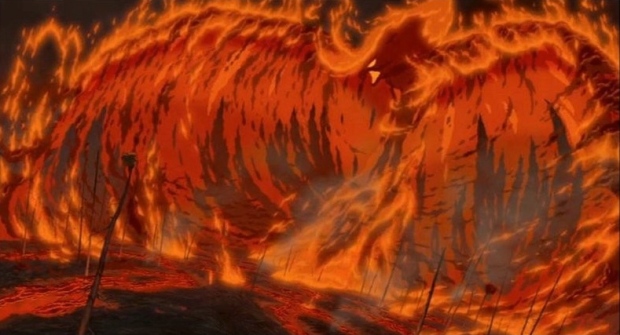 I include both of these characters for the same reason, their abstract beauty. Each represents a different side of the world, one who creates life and the other who destroys it. Everything about them seems to flow and change. The forest, like all nature, was a never ending torrent of growth, especially at its height during the springtime. With feral brown eyes and long flowing green hair she is always what I picture when I think of mother nature. As for the firebird, where the forest spreads nourishment and life it takes it and burns it away, though it still has a beauty of its own. Both of them are directly connected to the earth and spread down towards it in blankets of plants and lava. I love animation that flows like water. Eris, who I mentioned in an earlier post, does something similar except it is with these two characters that we see this idea at its best. They symbolize the deities of life-death-rebirth, with life ultimately triumphing over death.

Ward Kimball, Eric Larson, John Lounsbarry all contributed to this character’s design and animation (From what information I could gather) and did a phenomenal job capturing this complex character’s nature. The idea of the character itself comes from 18th novel A classical dictionary of the vulgar tongue (1788) by Francis Grose as an ominous personage who, as Peter Pindar put it in a Pair of Lyric Epistles (1792), “Lo, like a Cheshire cat our court will grin.” As for this Disney character, he is not evil or delusional, rather he is happily untouchable by Wonderland and its problems. As he stated in the movie, “You might have noticed I am not all there myself.” This makes him so likable for me. I love the way he constantly changes his body and has such freedom over the world. 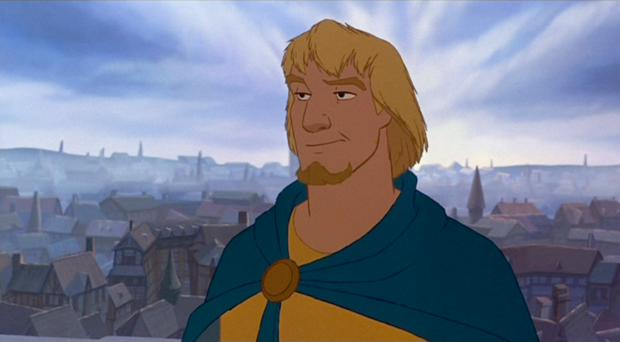 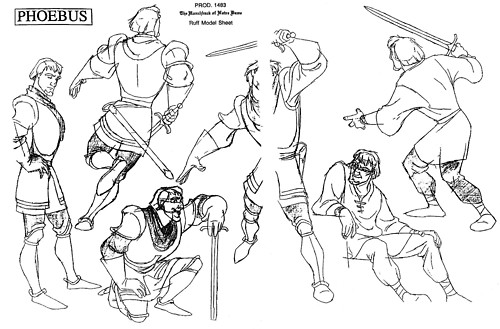 Russ Edmonds, nominated for an Annie Award (1996) for his work as supervising animator for this character, created an infinitely complex and likable person. Hunchback is undoubtedly one of my favorite films, partially because it has more than one hero. Quasimodo does not get the girl, rather this handsome soldier does. The best part is that he deserves her love. Now, as for his design I like him because he is much more mature and battle-worn. Edmonds commented saying, “He’s not some young kid who has to decide what’s happening in his life. He’s already done. He’s been through the ropes, he’s been through a war. He has a broken nose, and he’s had battle wounds. Because he’s been through his life experiences already, he has a sense of humor about life.” His facial expressions just crack me up sometimes because while such horrible things are happening or men like Frollo are making sullen speeches about peasant festivals he has this look that says he wants to say something sarcastic. 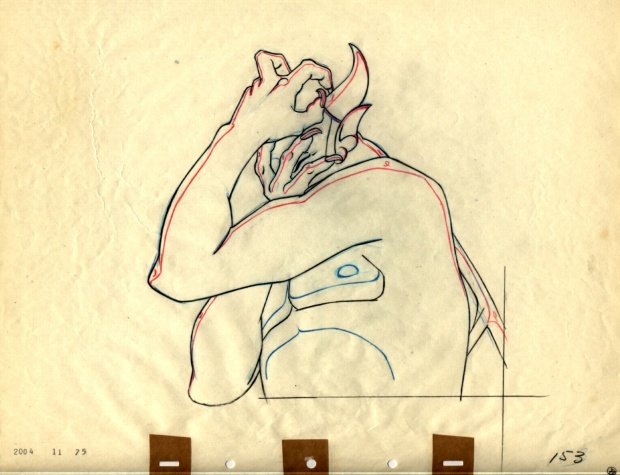 Here is yet another Fantasia character, this time animated by the veteran Golden Age animator Bill Tytla. Despite popular belief, Bella Lugosi did not provide the epic poses for this character but rather one of Tytla’s colleagues. Based on a real figure from Russian folklore Crnobog, the Black God,  he represents the darker side of the world, bringing together a host of evil beings to twist, maim and distort purity. His domineering presence has been one of the highlights of my childhood. He is terrifying but powerless against God’s presence, even after created such evil and spreading so much depair. My favorite poses come when the light of the church bell hits him, while he cringes against its innocence and as he opens his gigantic wings to summon his minions to Bald Mountain, where it is said the devil and his minions meet. 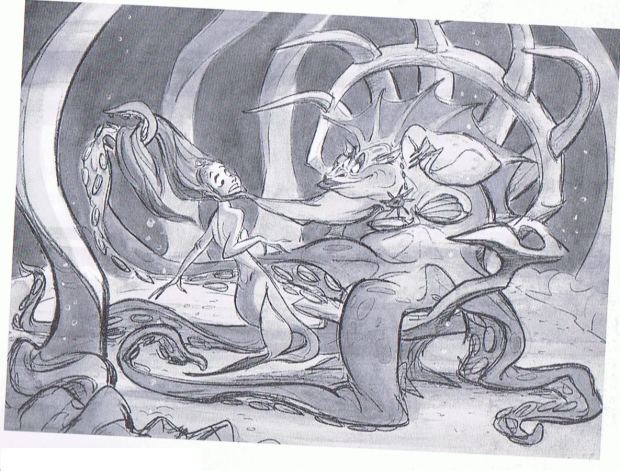 Supervised and designed by Ruben Aquino, this character was the most dynamic Disney villain to cross the screen since Cruella DeVille. There is so much I can say about this character from her manipulative, fast talking schemes to her overall demise. For the sake of time though, I will stick to her looks. She reminds me of Mrs. Iselin from The Manchurian Candidate (1962) a character played by Angela Lansbury who stays in the shadows but slowly finds a way to grab hold of the audience and manipulate her son perfectly. Ursula is an embittered, fat and far from satisfied woman, who I could easily picture smoking a cigarette and eating caviar from a tin. The way she moves and carries herself is just so self-gratifying that I cannot help but love how evil she is.

Recently, I did a project on Sleeping Beauty with my middle school students. This tended to be a challenge because of the new film Maleficent that came out last year. As a villain she is spectacular.  One thing that perplexed and really disappointed me in the remake of Disney’s original film is that they completely changed her character. In our society today, people do not like the idea of anyone truly being evil or bad. So, in movies, director’s create empathetic anti-heroes whom we could support in their evil actions because they had a hard life or were driven to do what they did. I believe this is a mistake especially in this movie’s case. Maleficent truly means “mistress of evil” and in this film walks with the grace and elegance of a well-seasoned and set villainess . Meaning, she decided to be the way she is and is perfectly happy with it. There is no going around it. Like all medieval art from the 14th and 15th c. she has strong, tall vertical lines. Technically she was designed by two people: Wolfgang Reitherman designed her dragon transformation and form and Marc Davis her regular, graceful human appearance. 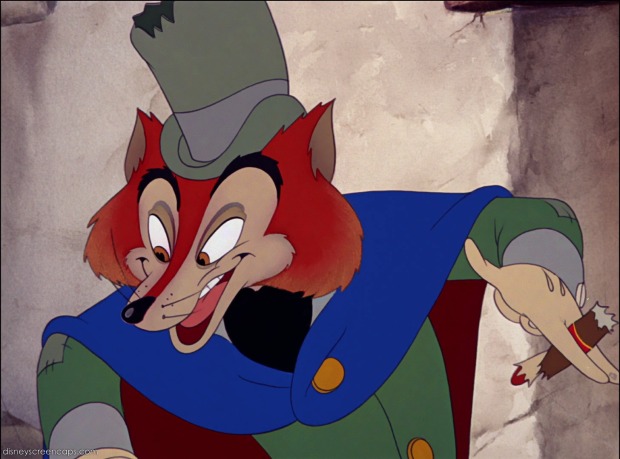 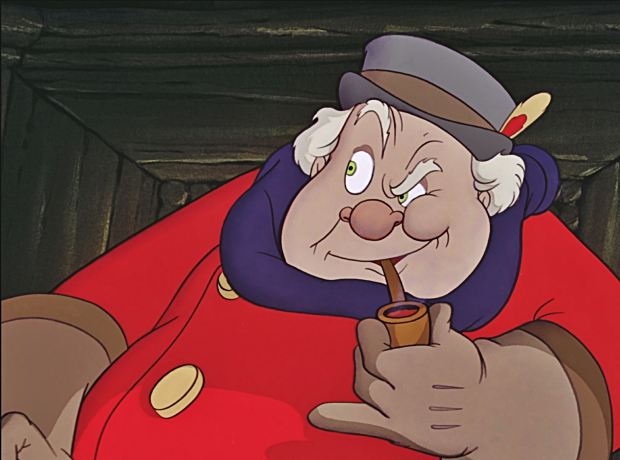 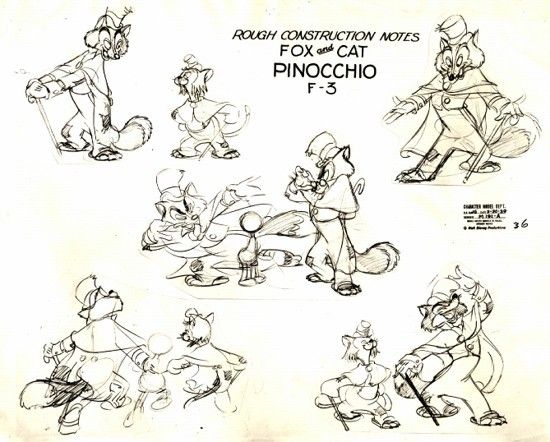 I could not decide between these two characters. I love them both for different reasons but acknowledge the genius behind both. Norm Fergusen and John Lounsbery designed the fox Honest John and superbly captured  his mischievous nature and his unstoppable state of motion. Christopher Finch, who wrote The Art of Disney’s Animation (1973), remarked that unlike the raging villainy of Stromboli, Honest John and his partner were in fact “self-made villains” out to get money and never brought to justice. His design fascinates me because while he has a face that says that anyone could trust him, his appearance, cloths and suggestions are far from cordial or believable. Luckily for him, Pinocchio was a naive and easy victim to manipulate. He reminds somewhat of Fagin from the musical Oliver! (1968) because his character is entirely shaped by coercion and he always has a smiling face that hides his dishonest intentions.

Now, as for the Coachman, Charles Nichols designed the equally deceiving mastermind of Pleasure Island. This character does not have very much screen time but his influence and evil is more horrifying even than Stromboli. Turning the boys into donkeys, he tricks foolish young boys into throwing away their childhood innocence for a night of foolish revelry. He is big, boisterous and a hateful terror that can only be conceived by human greed. My favorite scene with him is in his conversation with Honest John and the cat Gideon. One minute he wears an angelic face, easily a face that can trick even the brightest child, the next it completely transforms into a devil’s head. Surprisingly, he did not terrify me as a child but then again I was weird and loved villains in movies more than heroes.