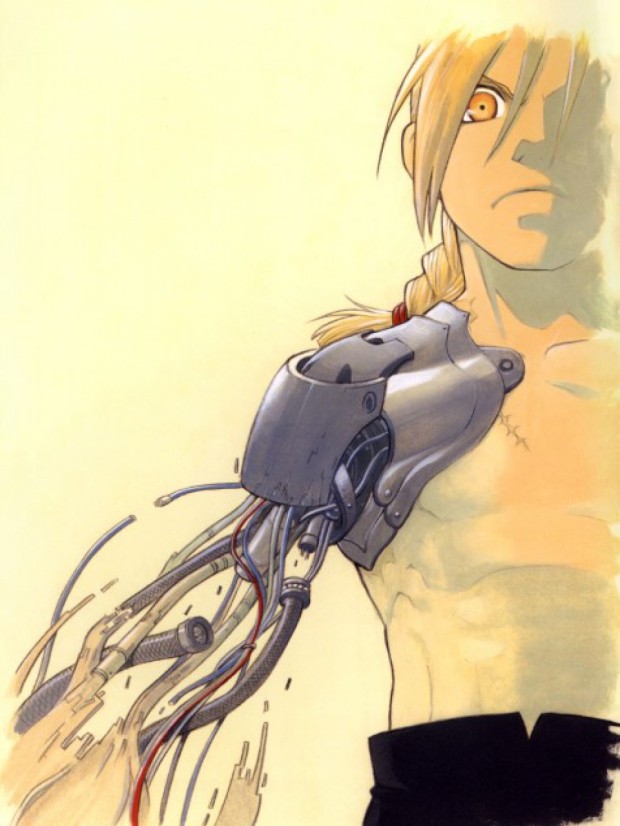 Ahhh…. My first manga entry. I have said this before and I will say it again. Most manga is average at best. There is, however, that enduring 1% which exceeds beyond any of it contemporaries in to great art and storytelling. The artist for these two drawings is Hiromu Arakawa born 1973 in Hokkaido. She came naturally from a farming family but moved in 1999 to Tokyo to pursue a career as a manga writer. Her first series Stray Dog (1999) won the ninth 21st Century “Shōnen Gangan” Award and gave root to her most acclaimed work Fullmetal Alchemist (2001-2010).

For Fullmetal, she did extensive research in human anatomy, criminology, history, science and a myriad of other subjects in order to sufficiently create her remarkable work. Her art is unlike any Japanese manga-ka I have ever seen and her ability to create relatable characters and situations is impeccable. My suggestion is to at least give Fullmetal Alchemist Brotherhood a try. I consider this series to be a masterpiece.

For today, I listed two drawings from her released art books. I chose both of them because they are very similar too each other and I like them for the same reasons. Edward is my favorite character from the series so I naturally picked my favorite drawings of him. I also mentioned him as one of my top ten animated character designs a few weeks ago.

Now we come to the good part. Why on earth would I even consider these great works of art? Firstly, Arakawa-san obviously understands the human body extraordinarily well and it shows wonderfully in these drawings. If you look closely at the second work, you will see the details in the muscles and the automail arm. The arm is very important. To make the metal arm work it needs to connect to specific nerves in the shoulder. Each of the wires connects to these individual nerves as an artificial extension of his body. In the first picture, the completed mechanism can be see in full detail. What kind of artist, especially a manga artist, would go to such lengths for anatomical accuracy? The answer is a great one.

Secondly, she drew and colored these without using her computer as a cop out. Trust me. A LOT of Japanese artists do that. Truly, her talent is stunning. Once out of high school, she took oil painting classes once a month for SEVEN YEARS while still working for her family. This is a person passionate about her work. For these two specifically, she was able to ascend beyond the more cartoony style often associated with anime and manga and create an atmospheric and eye-catching depiction of Edward as a character. You can feel his intensity and sense his maturity. Would it surprise you to learn that these pictures depict a fifteen, later sixteen year old boy?

Lastly, I love the attention given to the shading and Edward’s eyes. Again, there is a sharp intensity in his eyes born from tragic childhood events. In the first, the shadowing around his face and body captures the character’s serious nature. The focal point of each picture is definitely his face and each lead down to his arm uncovered or shattered. I also noticed that Edward’s face is partially shadowed in both pictures. I would say that at least the second picture especially can be considered an extraordinaryly balanced piece visually. I love how the shadows accent his face and dilated eye.

You can guarantee that Arakawa-san will be on my list of favorite artists. Will  many people agree with me? Probably not. But one must wonder how a person like myself who just listed the work of Gian Lorenzo Bernini could possibly consider a manga writer a great artist. I guess I am just an anomaly.