(Image from Tekkonkinkreet (2011) )
(Big announcement! There are now 51 films on this list. I could not decide which film to drop from my top 25 so I now have 26. I am sorry for the odd number.)

Here is how this list will work. I will put the first 25 films in chronological order. As a side note, if I put a film on this first list it does not mean I do not think it is visually stunning or a technical achievement. It simply means I have no personal attachment to them.

I want to acknowledge these films the best I can. This is the hardest list I have ever done for that reason. I have gone through perhaps a hundred films and probably still did not acknowledge all the right movies. But I am not perfect and can only do the best that I can. Shall we get started? 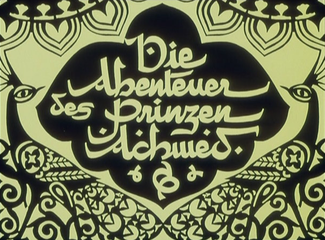 Released by the incredibly talented pioneer animator Lotte Reinger eleven years before Snow White and the Seven Dwarves, The Adventures of Prince Achmed is the ultimate testament of the mastery of sillouette animation. Sillouette animation, a technique invented by Reinger, is an intricate process involving cardboard cutouts set against black lighting.  This is like puppet shows see throughout history that use similar techniques.

I can understand why many admire Reinger’s work in this film. The attention she gives to details in clothing, architecture and natural backgrounds is admirable. However, I think this film is not necessarily an aesthetic achievement. Technically it is brilliant but I could never put images of it on my walls. 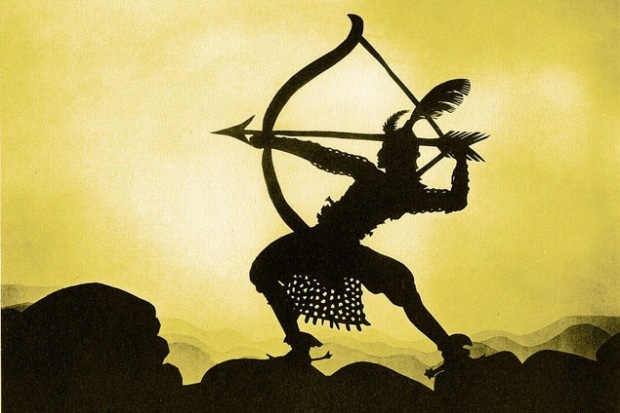 I think my apathetic feelings for this film center on its non-fluid animation. The lack of sound was not an issue for me.  (I am an avid fan of MANY silent films). For myself, after a while, the beauty of the animation was lost to me. I could flip through these images for maybe ten minutes “ooing” and “ahhing” and be content forever.

Despite my feelings, I do recommend, if you are a fan of animation, to watch it for yourself and admire its own type of beauty. This is a unique animation style even less known and acknowledged in our technological age. 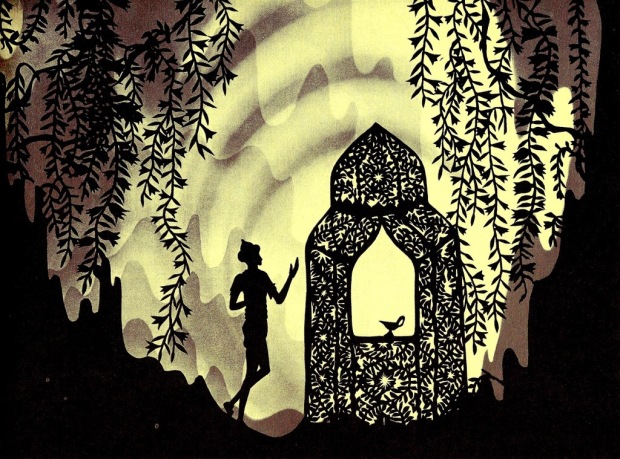 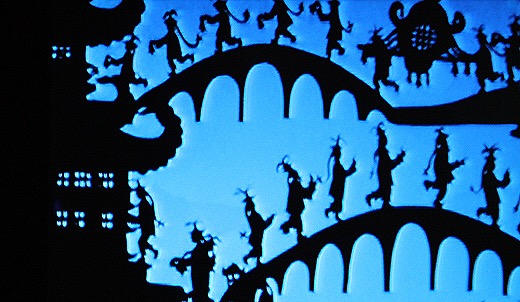 The first widely accepted animated film, this movie took the world by storm. Cartoons were never taken seriously until this movie. Disney had to mortgage his house in order to release it, a step even his brother Roy argued against. It was a risky gamble, but the film stands today as one of the greatest technical achievements in film history. Even Sergei Eisenstein, director of the groundbreaking Russian film Battleship Potemkin (1925) called it the greatest film ever made. It was also Adolf Hitler’s favorite movie.

Albert Hurter was primarily responsible for the movie’s art direction, aided of course by Ferdinand Hovarth and Gustaf Tenggee. Walt Disney wanted the movie to look and feel like a European illustration and to have a darker atmosphere. The final product felt like a storybook come to life, in ways no one thought possible.

Now, this is another instance where, in my mind, technical achievement must not overlap visual beauty. The backgrounds are pleasant but I do not think they extend beyond that. I do admire the talented artwork of the artists like Hurter. Unfortunately, most artists who worked for Disney were not recognized as they should have been. Such was the life of many in the beginning age of film. 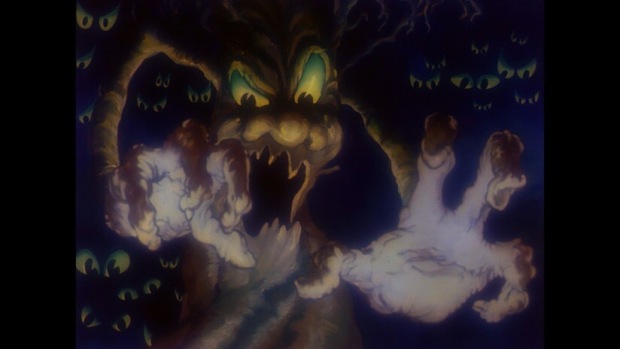 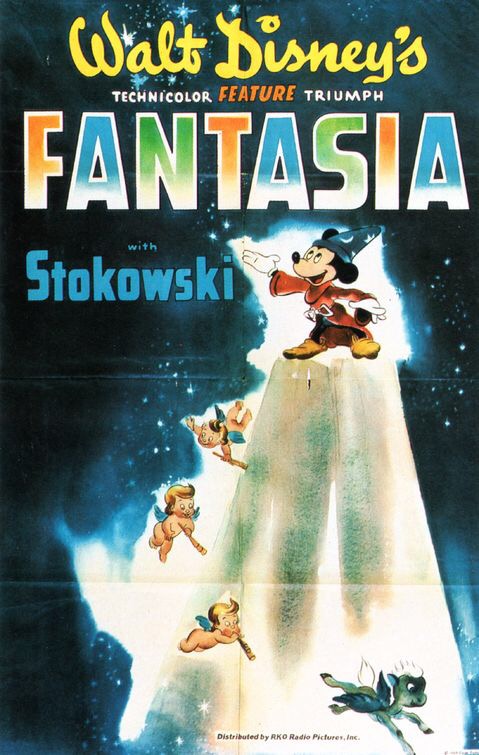 Another of Walt Disney’s great experiments, Fantasia  proved that animation is an art form worthy of the genius of many classical composers. It proved that if someone can imagine it, it can be animated. Of course you have those conspiracy theorists who look at this film with sneers and even snores. But, in my mind, it must be evaluated not as usual entertainment but as an aesthetic experience. In other words, this movie requires people to think.

Again, this is a great technical accomplishment but it is not always the most beautiful visually. (I am starting to sound like a broken record.) There are moments from the film I would include in a list of beautiful moments in animation. But, not every part of the movie is admirable that way. One scene that comes to mind is the abstract number set to Bach’s Tocatta and Fugue. I do not think it is that beautiful, but it certainly stretches the brain cells.

While making this list, I kept trying to differentiate between visually rich movies and beautiful films. I think it took Disney a while longer to finally get a grasp on animated films and creating a beautiful atmosphere in scenes from his films. For example, Pinocchio (1940) may be perhaps the most perfect hand drawn film in worldwide animation, but it did not go out of its way to show audiences beautiful imagery. 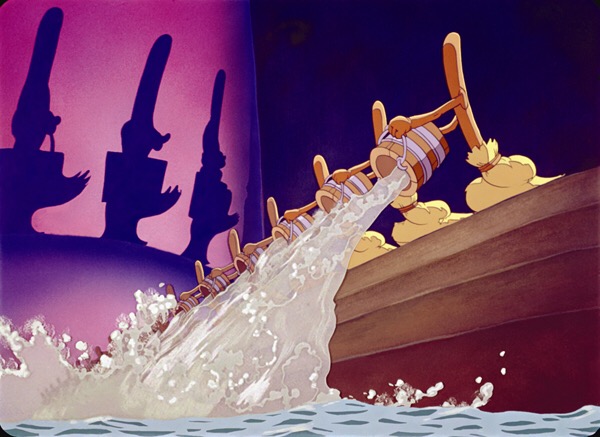 The same thing applies here. I believe this film is a masterpiece but not the kind I could collect art pieces for.

After the EXPENSIVE budget for Sleeping Beauty (1959), Walt Disney down graded the animation studio. The result was 101 Dalmations. I lament the loss of the high level artistry present in all of Disney’s films before the 1960s. However, the art style and take on the 1956 novel by Dodie Smith was not a complete separation from high quality art. Yet. 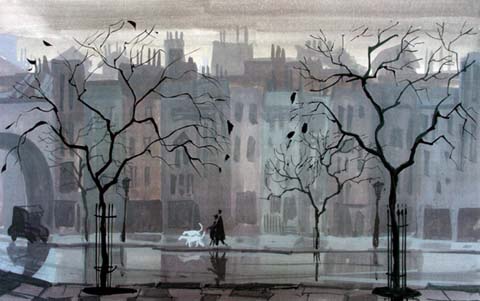 In the art book for Big Hero 6 (2014), the art director referred to this film’s art style as “wonky”, where everything is slightly offset. This gives the imagery in 101 Dalmations an antique sort of look. This was a very popular idea in the mid 19th century though artists applied this idea differently depending on their personal style. I really like this style but I think it only works in this movie. Sadly, because it was cheaper to make, all the films that came after copied it until the 1980’s.

Ken Anderson was the film’s art director and had to watch the change in Disney’s animation style. Disney did not like the grated, simpler style for this movie but accepted it because of how expensive animation was if drawn the old fashioned way. I think that this film is visually nice and different than previous animated films. But, something was missing visually. I think when Disney starting worrying more about production costs it was a sign the magic of his earlier works was slipping away. 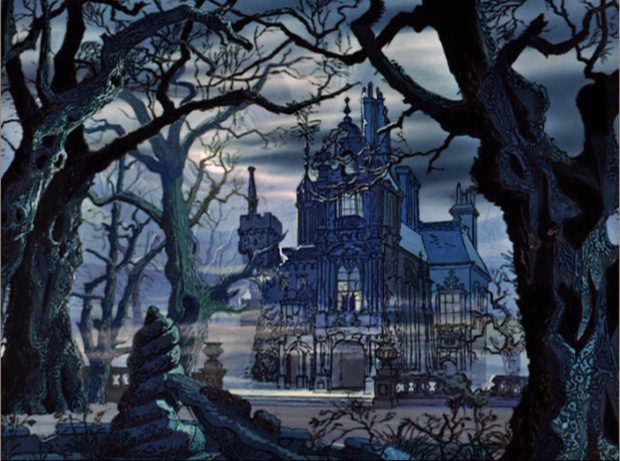 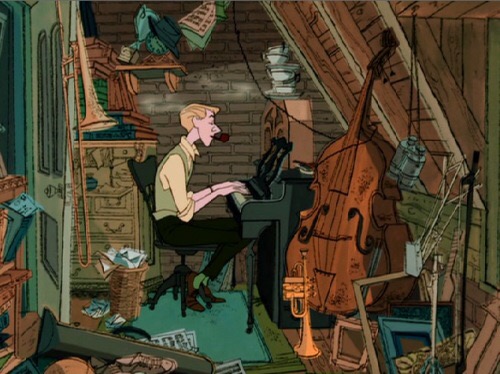 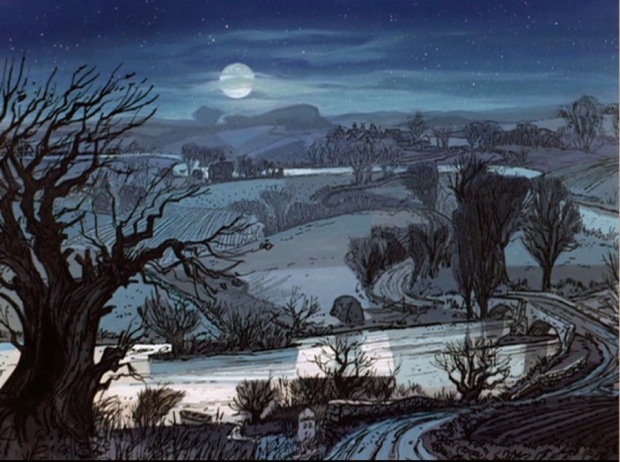 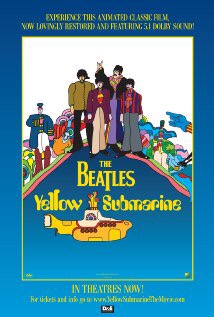 Alright, I have never seen this movie. But I have seen its trailers and studied its animation and artwork. I have many questions about this film, the first being, “Why on earth was this made?”  The second is, “Was everyone who made this movie high?”  Obviously, this movie’s art is not my cup of tea. (No pun intended British film). But I acknowledge it here as a formality.

Bob Balsor and Jack Stokes were the film directors and supposedly this film was artistically and musically modeled after Fantasia‘s style. (I must have watched a different Fantasia). The art director, Heinz Edelmann, wanted the film to look psychedelic and promote the new hippy age. The film is VERY brightly colored and loaded with varying scenes of unique art and animated movement. 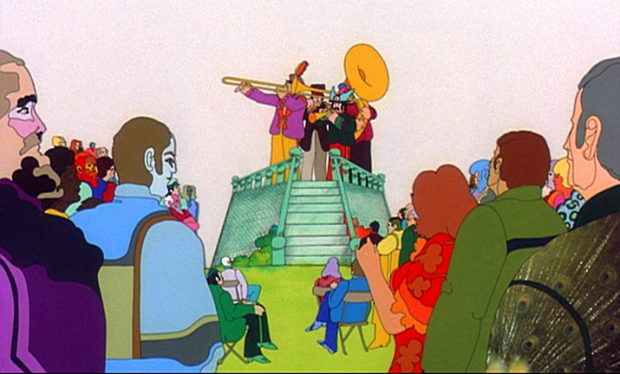 I will be honest. Looking at these pictures and thinking about this film gives me a major headache. I am not a fan of this type of film making. Another movie similar to this is Sita Sings the Blues (2008) where the plot and imagery is very abstract and even Impressionistic. I could not finish that movie. Not because it was not well done. I am just not into that kind of art.

But to each his own right? If people love this movie’s art and think it is beautiful than good for them. (I have a feeling that Monty Python borrowed a lot from this movie’s imagery. Also, what is up with all the character’s teeth? It looks like my childhood drawings have come back to haunt me!)